My potatoes have looked like shit for a few months but I kept watering them hoping there would be earthy hidden treasures behind that old rubber. They were so gorgeous at first. Fingers crossed. But then I knocked over a tire tower expecting what was promised to me: 20-30 pounds of spuds and instead I got like 20-30 ounces. Super lame and disappointing. I think it is blight which also got my tomatoes but they are still producing like crazy. 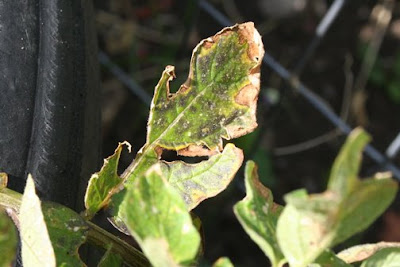 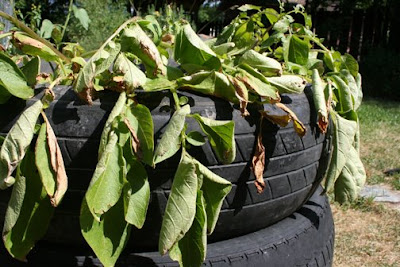 The whole point of the tire stack was to force the stem into root by burying it. And since potatoes are a root, then you’d have an assload of potatoes to enjoy. But I carefully removed tire by tire, heart racing in anticipation of a Mountain of Potatoes, only to uncover a scrawny helping that served Andy and me and one friend as a side dish to our giant elk steaks. 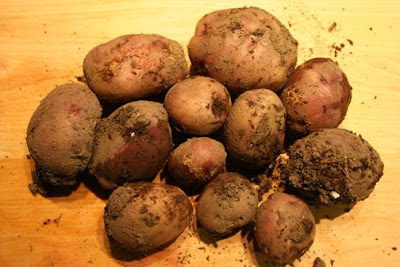 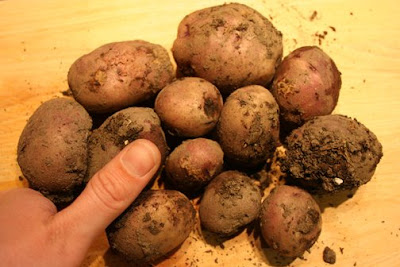 The first lame yield looks especially lamer with a thumb as a point of reference.

I waited another few weeks to knock over the second stack and it was slightly better but still, the little-eyed dudes were all lounging at the very bottom. In other back yard news, the chickens are doing well although Bossy still isn’t laying…many think we have a cock on our hands. 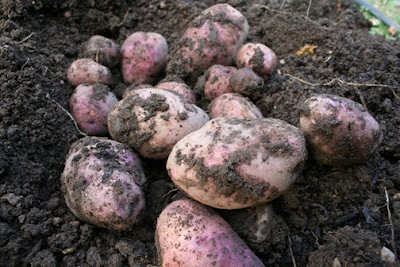 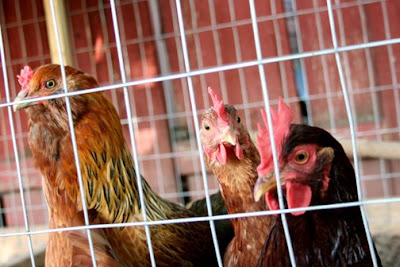 This is my first time growing potatoes because of the space issue in my small plot. They never flowered. I am wondering if I should have left them in the ground longer…just when you think your thumb is bright green, mother nature bitch slaps you and says you have a long way to go.
Share
dig gardens

Is that Bossy P on the right? Because she does kind of look like a he. If s/he starts crowing, you’ll know.

The potatoes you did get are cute!

Were the potatoes better-tasting than storebought ones, though? I’ve got similar space challenges, so I was wondering if it’s worthwhile even for a smaller yield…

I know you’ll figure out the potato siuation and next year you will have to give them away!

Rooster or hen….sure are cute chix!

Oh man, I feel ya gal (wtf with my peppers this year????), and I look forward to watching you figure it out because I am right behind you with those tire stacks. I know you’ll do it.

P.S. I think we might have a rooster too – s/he keeps “honking” and throwing her head back to crow but nothing comes out. Please, please, let us both just have two very butch hens.

Patia, Miss Boss Thang is on the left in that photo. The tall, scary one.

Hey Nici, I’ve been meaning to ask you: are you going to put (or have you already put) a light in your coop so that your girls will lay through the winter?

H, Yeah we have a light. Montana gets dang cold in the winter. Although I don’t know about the temp below which we will use it….some say 40, some say 30. This spring we had a light on the pullets when they went outside and we just turned it on every night.

How bout your hens?

Hmmm, well the place we got our girls from told us not to do anything to heat the coop; their shtick is that if you get the right kind of birds for your climate they should be able to handle the cold, and then they kind of terrorized us with the idea of chickens who haven’t adjusted to the cold kneeling over dead when the power goes out or something. But all that said, I know it doesn’t get near as cold here as it does there. Just a week ago put a regular lightbulb in the coop on a timer so that it comes on for an hour and a half in the morning before it truly gets light; I think otherwise their bodies sense from the shortening days that winter is coming and they stop laying? I don’t know. It feels kind of rude to trick them into thinking it’s egg laying time all year, but otherwise we won’t get eggs until spring!

Gah, long comment: all to say, keep us posted on how your girls lay this winter!

(And dance on lady. The first time I rode my bike to work again – 6 hilly miles each way – I felt like I had lead in my ass. The second time was even worse; lead in my ass and fatigue in my legs. From then: better, and I arrive home wild eyed and hyped on my own GO and wonder how it is that expending energy can make it. Fucking awesome.)

sorry about your potatoes! Not sure what I did differently, but mine all seemed to flower. I think I will harvest in a month, as the greens are still green and not yellow yet. Did you get them in too late maybe? Or not enough soil? Rats.

I don’t worry about my hens with the cold unless it drops below 20. I just add more straw, so they can nuzzle in if they get really cold. But they seem fine with it. They get a little fatter and grow in more feathers for the winter.

You can generally tell a rooster by the time it’s 4 or 5 months old because it will start growing spurs on its legs, about one inch above its feet. Hens usually start laying around 20 weeks of age. Do you know how old your girls are? They’re lovely chickens.

It does look like wilt in your potato stack. Did you use potato seeds or old sprouting potatoes you had in the kitchen? Don’t give up, love. Next time, make a potato cage – poke some star pegs in the ground and wrap wire around it to make a tall wire circle. Put some compost and straw in the bottom and plant your potatoes. Add more compost or soil and water them. When you notice the green shoots coming through, add straw to the top and keep adding it, with a bit of soil or compost until you can’t go any higher. Hopefully, that will give you good potatoes.

The problem with a tyre stack is that tyres have cadmium in them and it may leach out into the potatoes.

Good luck with your garden.

BTW, you look so beautiful and happy on your wedding day.

Hey, sorry about your potatoes–I didn’t get many either, but hail was to blame here in Bozeman. Yours don’t look like they were just doing a normal end-of-season wilt; they do look seriously unhappy. Flowers are so unobtrusive that they’re easily missed, so their absence doesn’t mean much. I hope you have better luck next time.

I’ve got a question for you. I’m in the middle of an exchange with someone in Ontario who says it’s a myth that potatoes will produce all along their stems if they’re mulched high enough. So I’m wondering: where did you get your method from? You say you dug into the first tire-hill looking for the 20-30 lbs of potatoes you were promised. Who did the promising? Do you know someone who’s actually gotten potatoes to grow out along a stem?

Kate, I should dig deeper (ha!) and look into the millions of pounds of potatoes in a tire. My friend who grew up on a farm told me it worked for his family….I’ll let you know what I discover! It for sure was so disappointing though.

found at blotanical— my students want all the potatoes to be huge. Worst then finding a small one is a big one that is rotted. I don’t grow them to make a huge profit, but for the students to experience growing a potato.

Hi there, just wanted to mention, I enjoyed this article. It was funny. Keep on posting!