Indeed there are at least eleven storms colliding directly over the top of the interstate forcing a nine-hour drive to the coast into a 13-hour endeavor, then one considers the dog and one-year-old bug and decides against the drive to Portland for the holiday. At least we did, anyway.

We have been feeling funky about not being in our favorite pacific city with our favorite people (especially when they announce they are with bun in oven and we can’t be there to hug). And then there’s the pleasant circumstance of my man and me having five days off together with no agenda. And friends popping in to go on three-hour walks and spontaneous invitations to meals with bffs. And, well, it leaves me really in love with my town and my pals.

We drove up to a friend’s cabin on the Blackfoot on christmas day. The drive was horrendous and confirmed our smart decision to avoid Portland (cause I was full of doubt in our choice and wanting to hop in the car and just give it a try and Andy was all no way in hell are we doing that but I won’t admit that he was right and he’ll never know it because he doesn’t read The Blog).

It was just our little family unit with a pile of gourmet noshes in a snowy snowy cabin on the river. We cooked and chatted all afternoon, ate a scrumptious several-course meal, sipped delicious wine and played scrabble while hopping about with our dog and kid. It was a really great day.

And, then, the next day, we sat by the fire and savored thick coffee for hours while finishing the scrabble game (ahem, I won even though I let Andy count unibrain. I put my foot down at duifarm) and then we trekked through the snow for hours.

So I left our journey feeling like you really can polish a turd. Andy uses that phrase carefully in the opposite context–he works in construction and people are *always* trying to make shitty 80s tile look like a thoughtful and intended design decision to which he replies you can’t polish a turd. But, what I mean is more in reference to the whole lemon and lemonade thing. This christmas we polished a road-weary, garland-bedecked turd and it turned out fabulously.

apologies for the lack of specifics…..I winged it and you should too. One can never lose with olive oil, garlic and butter. 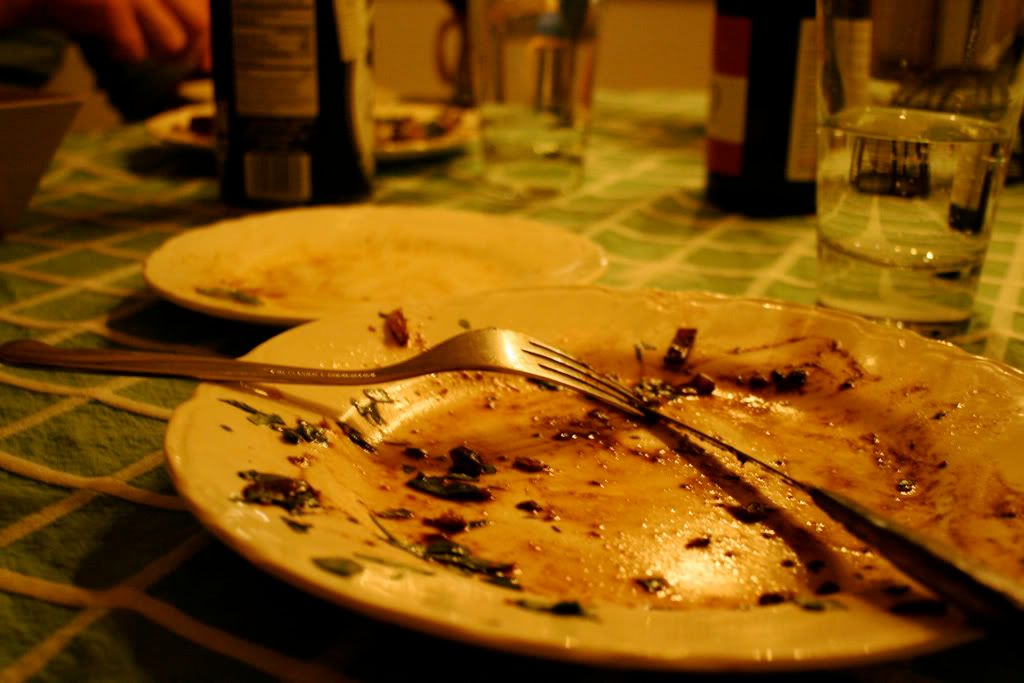 This sauce took forever and was so worth it but my man cooked it and I don’t know what he did so here is a picture of the fabulousness and you can e mail me if you want the recipe.

*full merries and hos credit given to Pam

what a gorgeous photo of you and bug. wowie. and great looking food, too. i just made us some awesome filet mignon tonight sans recipe, winging it. it’s a crapshoot, but when it turns out good, it’s so worth it. here’s to making our own holiday traditions. an act of weather is worth listening to. you and gillie should come to the bay area soon! we’ll go to wine country!

that’s a christmas right out of a story book. seriously. just so incredibly beautiful. last year, i found the joy of enjoying that day with just our own little family and, as sad as i thought it would be missing everyone, it was beautiful. although a cabin in the woods would take that beauty to new levels…i have to admit. you look incredibly happy.
oh, and me’s spies a little hat on you’s little. and it looks like divinity. merry christmas, friend.
your food puts my spaghetti to shame.

A sublime start on a new year! May it be an extraordinary one for us all.

PS… unibrain? duifarm? You do love him!!

It seems like my favorite holidays are always the ones that don’t go as planned!

it’s the unplanned things that make us relish what we truly have.
and that food. yum. we were trying to go mostly vegetarian again … your food photos might have just tossed that idea in the can.

Everything looks so good! I’m totally making your brussels sprouts tonight – thanks 🙂

Good on you for making the most of your surprise plans. I found myself grateful for our impromptu plans, too.

i’m making those brussel sprouts…they look yummy. thanks for the recipe!

So happy people will be making the brussels sprouts! Might feel like giving up while trying to peel the tiny, thin leaves off of the sprout, but don’t! It is SO worth it.

I am making that cauliflower this week—a good side to spinach risotto I am making for a friend. It looks great–

What’s up, just wanted to tell you, I liked this post. It was practical. Keep on posting!