two of my favorites

I am officially combining my writing efforts here on dig. The bug blog felt right until recently when I began to feel that the things I write about, ramblings about my life, can’t be separated in a tidy or meaningful way. You might notice the running with a sprightly dog has been removed from the sub-line and that is only because I am not running lately. Alice will still make regular appearances. She’s a big part of our life.

Can I mourn a blog? Cause I am. This decision is a thoughtful one. I poured my first year as a mama into Margot’s blog. My 16 month-old girl is now a big peanut and when I document her chronicles, I am recording her in the garden, kitchen, trail and studio. It’s all life. And, so, the new dig. Whew.

I never fully understood wanting to freeze time with a kid. I have always been excited for the *next* epic accomplishment. Smiling, eating, rolling, crawling, walking, talking. Bring it. It just gets better.

But now I get it. I want to freeze bug right where she is in all of her goofy, insightful and surprising perfection. This is largely because of two things that have been on my I-can’t-wait-for list since her inception: mark-making and dirt-digging.

Sometimes I lose my breath when I see her grab a tool, snag an envelope from the recycling and strike a scribble. I grew up making art, got my degree in it, married a painter and now work at an art museum. It’s one of those things that I just so so bad hoped she’d want to do. For Andy, it’s skiing. He can handle any sort of proclivity as long as she skis. For me, art and earth.

Now, when she wakes from her nap, she sleepily yawns, owe sigh? Outside. She loves our back yard. She wanders in the tall grasses, picks at weeds, says no no to the chickens, giggles. My cousin bought her a tiny, bright blue watering can with a shovel, rake and spade when she was born and that little set has been on a shelf in our garage since then. Until a few weeks ago. Now, when I grab her bonnet, she knows outside is on the horizon and she gets that throaty, breathless giggle. 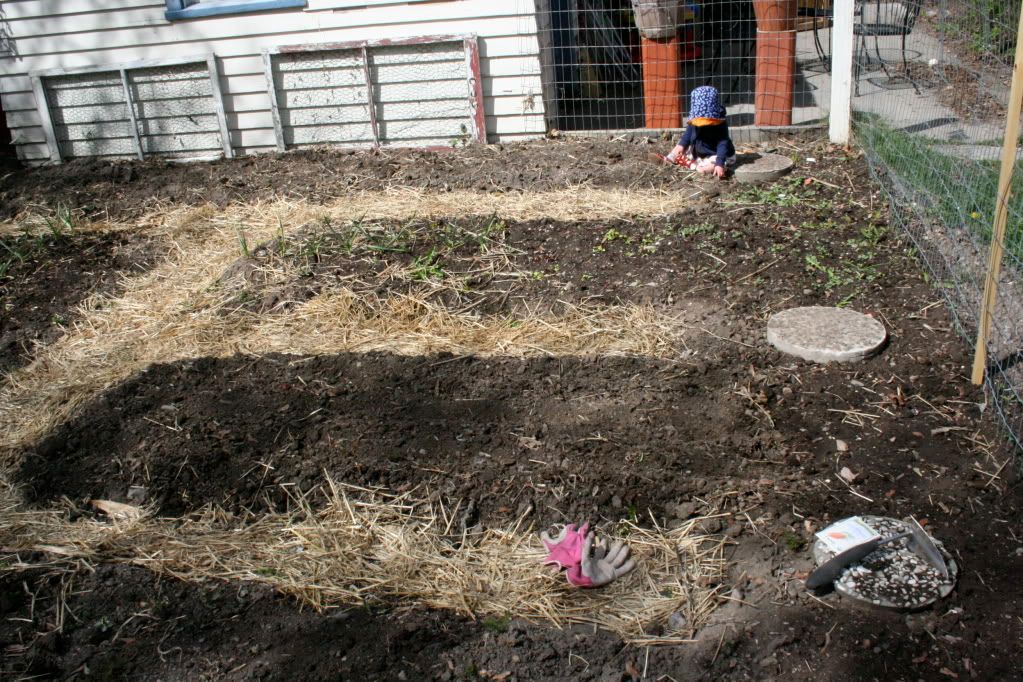 She jogs out the back door, grabs her bucket and digs in the dirt. Oh, it melts me. So curious, she asks what everything is that I am doing. Planting carrots, my pea. or He’s a worm. He’s cool. She digs it. Thrives.

She even helped with my garden map today. ahem.

Funny, because below was my map last summer. Um, yeah, time spent elsewhere now. Although this is super handy. I refer to it all the time and it is easy to record successive plantings and crop rotations…some day.

Art. Not that I will perish if she isn’t an artist, but I want her to have unguided art-making experiences as much as possible. To facilitate easier creating, I converted the space directly behind my desk into her kid studio. I don’t want drawing to be an ordeal of digging out materials and subsequent put away. I want her to have access to it at all times. My mom and her cunning garage saling ways scored a tiny table and chairs a few years back. I started with painting the table red.

The whole set-up was super affordable: butcher paper taped to the table, a curtain rod mounted to the wall, tiny pails on s hooks full of scribbling devices, *just* out of reach now. When she can have unsupervised sessions (like when she doesn’t throw pencils as hard as she can on the floor and scream WWOOOOOOOOW, for example) she can grab whatever tickles her fancy. And, a larger vessel on the window sill for holding paints and clay and other hurky items.

Next to the curtain rod is a magnetic strip covered in ribbon for proud display of future masterpieces. I love it.

And, well, I suppose I don’t want to stop time at 16 months. Because, on the horizon? More intention. Choosing which seeds with which she wants to witness the magic of growth and deciding how her hand moves across the paper. Opinion. Oh my little feisty bug. I can’t wait for that too. 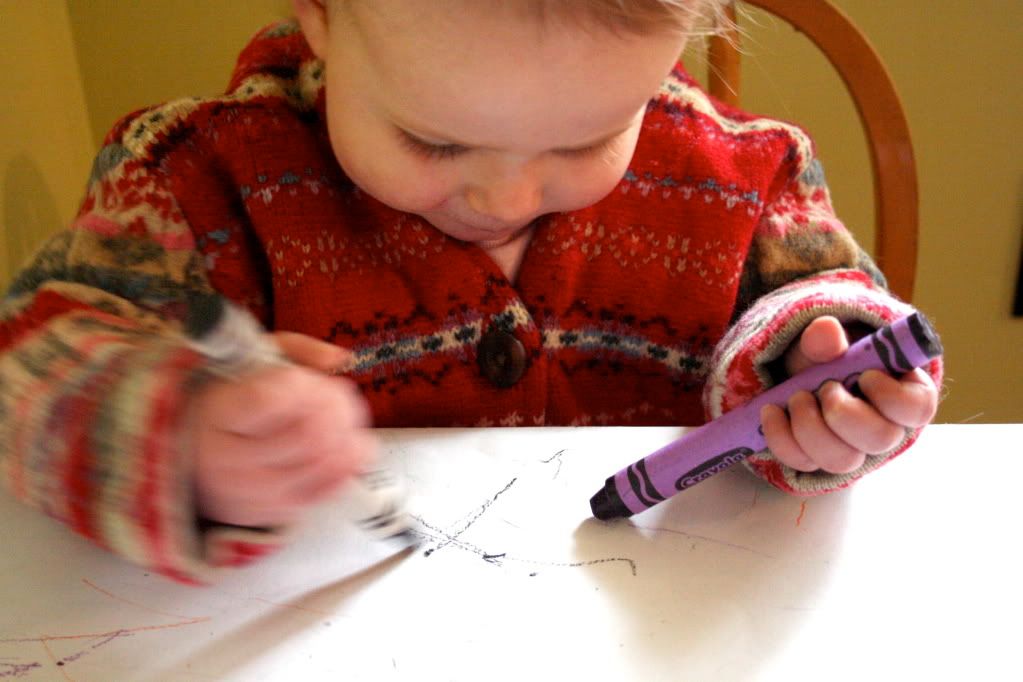 this just may well be my most favoritest post of all time because it hit a major nerve. a passion for my girl to be artsy and endeavors to make expressing herself easy and accessible. while we have crayons, markers, chalk, paint, paper, and clay very accessible, i am realizing…wow, as margot would say…there IS a manageable way to do this so that walls aren’t covered in marks and clay isn’t imbedded in the living room rug. and now my brain is driving fast thinking of those dollar pails i saw at target and how i shall do this myself and not ask for brett’s help. we shall find a way to do it in our own style, but your model sure does does inspire, dear friend. oh, and that curl under her bonnet? delightful. how is it that there seems no age gap between our girls now? i mean, they both have pigtails and hold crayons. except margot talks more. ha. xoxo

Oh my god I love the art station. Very nice!! I know the feeling of wnating to freeze time. It just seems that it just can’t get better than this, but it does. But it is true that time jsust seems to jet by. This was another fun trip you have taken me on. See you next weekend, XOXO

Oh, purple and black, my faves. 🙂 And is that a tiny pony?

I was the same with Nathan. I recorded his first pefect watercolor lines, I kept his early masterpieces and sold the rest for millions. 😀 I understand the need to want your child to discover the joys of creating.

Hey, speaking of which how about Andy bringing home the art bacon? Now that’s damn cool, too…. Read More

holy inspired. love those pails…i, too, saw those at target, picked them up, studied them, wanted, but put back…thanks for the idea-we need an easier way for crafting materials around here!!!

love how you wrote, “I want her to have unguided art-making experiences…” so frickin’ important.

so sweet how she likes to dig in the dirt with tools. love the bonnet!

i, too, shared some worms with the littles this past week. my big kids are way into them, want to keep a couple in the house for pets!

oh, and one last thing …
congratulations on your new bean!

your earthy ways are so very much inspiring!!

A blog is born…I love the new look! Bug’s studio rocks Nici!…… she will spend many fond hours there too. I can’t wait to receive special drawings in the mail….just like you did for your grammy and grandmother.

As for her gardening skills no problem. Don’t you wish you could be able to sit in a yoga position and dig?

Have a wonderful time with your sweet girl and soon to be bean….so much fun is in store for you…I KNOW I have been there and still am there.
Love to you both….xoxo Mom/Gram

OH MY and these photos!!!! Love all of them, especially the curl at the nap of her neck…..I just want to kiss it!
xoxoxoxoxoxo

Yes, you can mourn a blog. Because it’s really the end of a particular era, isn’t it?

So glad about the merger, though!

And the art studio. When we finally get ourselves to Missoula for a visit, Avi would love to get his hands on those supplies (not to mention the cute girl! He’s quite the maker-outer!).

Here I am, at work but not working. Again.

This too is one of my favorite posts. I feel all the same things. I love seeing the new excitement, curiosity, joy but I also can’t always believe that it is going to be even better. I am so excited about this summer and sharing the things I love with the little bean who just snuggled, ate and napped last year. Yay for big, little ones!

Pigtails? Oh my, no wonder you want to freeze time. She’s growing up so quickly.

Nici~you are such an amazing mama! Margot and your new pea are very lucky indeed 🙂

I’ve been thinking about creating an art space for Theo and you have just given me the inspiration I so needed~thank you.

And I totally get it about freezing time. I, too, have most always lived with the idea that each moment is so sacred but in the now is all that matters. Lately, I just have this intense need to suspend every moment with Theo, to keep them completely ours. I’m sure it’s because I’m starting to feel this little chicky getting more and more interested in making his way into this world, growing and taking up quite a bit of space now.

Anyway~it’s all beautiful and you do such an amazing job of capturing these feelings with words and pics.
xoxo

congrats on the merger.
you are right … there is a point where you just can’t neatly separate all of the facets of your life. they fit together and make you … you.
a wonderful art space. too … love the magnetic strip + ribbon trick. i had planned a drying line … but i think i like the magnet better … may i borrow that idea??
and my most favorite part of this post? (as if my comment isn’t long enough…) is the garden plan with margot’s input. especially in relation to last year’s. low tech is sometimes much better than high tech … and this year’s garden plan needs to be framed with a picture of the garden.

I’m so glad you’re merging the blogs. I understand, fully, the pull to separate the topics, or not to: I’ve struggled with it writing about queer life, gardening, cooking and perhaps they should all be separate. But together I think it makes your blog more special and unique in seeing your life and your words from your own unique perspective. Just writing that about my perception of your blog helped clarify that for mine. Thank you!

As to the art station…..wow. Lucky, wonderful girl.

hooray for wholeness. something happened to me when i had eliana — everything suddenly fit together and the teacher me was the dancer me was the mama me was the wife me was the sister me. you get it. so glad to see the streamlining. as always, blown away by the words, pics and creations.

I’m happy for your merge, as I can glimpse your “whole” life through the blog.

As a mom, we’re always juggling and I’m sure it will be easier to keep one up-to-date.

I love the studio! I’m mentally rearranging furniture to try and find a way to squeeze something like it into my tiny house…I can also relate to the excitement over having a budding gardener. These days my daughter usually brings a cup of dirt with worms in it everywhere she goes…it even sits with her at the table during meals! I am so glad she’s a worm-lover!

its only a matter of time before she colors on that freshly painted wall. Can’t wait!!! love you guys!!!