In my grandma’s kitchen: Applesauce Cake

:: Recipe number 1 of the 64 recipe cards I inherited from my grandma ::

Frank Sinatra singing out, girls well rested and ready. We were to make Auntie Lois’s Sugar Cookies. It took some delicate arranging of chairs and counter position but we made it. Ready to start this fun journey through my grandma’s recipe box.

We went to the coop to fetch two eggs and found exactly none. Peanut was sitting cozy in her nest so we knew we’d get one egg soon but the sugar cookies required two. Plan B: dig through recipe stack and find a dessert that requires one egg. Auntie Coon’s Applesauce Cake.

While we waited for Peanut to produce our egg, I gathered ingredients and the girls argued over a tiny monkey keychain whose origin I have no idea but in that moment, the furry dude was the most precious, beautiful, necessary object on the planet to both of my children. I tried to give them both a chance to watch as monkey helped soften the butter (do you know about this method? brilliant!) but they thought that was a terrible idea. I tried to give them each important jobs measuring stuff (their favorite) but that didn’t feel like holding a monkey. We talked and talked about monkey. Finally, through tears, Margot decided Ruby could hold him and then she’d like to hold him later. Later didn’t come soon enough and Ruby screamed MINE while Margot grabbed and the rolling pin flew and broke. That did it. Monkey off our backs.

Happen? Ruby asked again and again as Margot studied the old splintered wood and inquired about every possibility of fixing it. “Do you think it will be ok? Can we get another rolling pin? How in the heck did this happen? We could glue it. Or I could hold it like this while you use it.”

Peanut took her sweet, sweet time laying that egg. We kept peeking out the check only to find her nestled in, her little beady, unblinking eyes staring back like I am creating and eliminating an entire egg here people. It takes some time. Ruby sipped tea and required bandaids on both pinkies while Margot retreated to the couch with Alice muttering something about a broken rolling pin and never having eggs again.

Finally, we saw her leap out of the coop and strut across the yard to her pals. Thank you, Peanut. 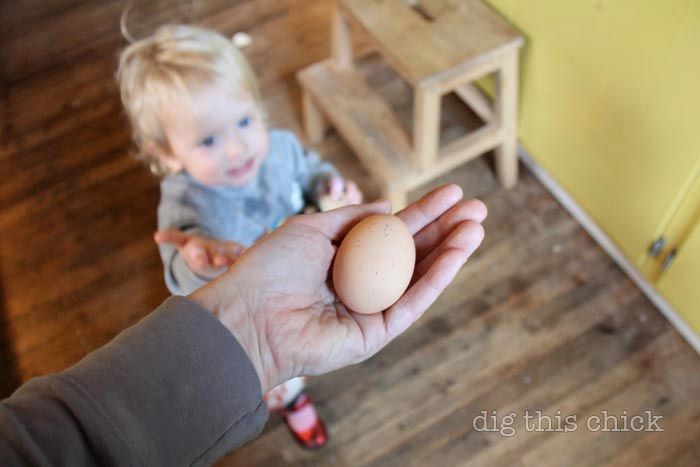 Margot sprung up as soon as she heard the mixer roaring. With her, she brought two blankets and several babies, because they were lonely. We combined and stirred and even cracked some jokes about the monkey who was so five minutes ago at that point. The girls were back to being best pals, lovingly feeding each other applesauce, generously giving away their turn at sugar measuring, collaboratively counting raisins.

The cake turned out beautifully.

MY NOTES:
I used butter instead of vegetable shortening and I only have 1/3 cup so I added more applesauce. I greased and floured a nine inch cake pan, omitted the nuts (allergic) and added and extra handful of raisins. I baked for about 40 minutes and I think 35 minutes would have been even better.

:: :: ::
Congrats to the randomly selected winner of an item from Melody’s awesome shop:
Dawn said…Great images–such vivid colors. Thank you for sharing your world with us. Love the cowl.
:: :: ::
all photos taken with a Canon Digital SLR from Vanns.com
Share
in my grandma's kitchen

love the crumbs and greasy fingerprints that made their way onto the scan of the old recipe card. family recipes are the best. (that’s my gift in progress for christmas this year to my family members…a collaboration of family recipes with everyone’s contribution along with photos)

In My Grandma’s Kitchen-so cool. I think I might steal that idea for my blog. Thanks!

Oh I love this! I think you’ve inspired me (although you inspire me a lot)…I just inherited my Grandma’s recipe box and what a beautiful idea to make all the recipes in it. Can I piggy back off your idea for my blog? Thank you for another great post!

Well, I just can’t get enough of Alice these days! LOVE that blurry tail:)

I think you have inspired me as well. I also inherited an old recipe book. Would be fun to do something like this!

I love this post – so real with the kiddos having their moment. Either the world is ending or they are best friends – same for my boys. Great photos too. I just started following your blog and love it.

Thank you for this! It’s good to know I’m not the only one knee deep in the occasional chaotic mess and that it does always turn around!
I *heart* the picture of Ruby reaching for the egg!!

I love the passed down recipes cards. I plan on doing the same with photos included; it’s a wonderful thing to pass down!

Can’t wait to try this!
I am always amazed at how baking with my children creates great memories. Despite the messes and the amount of time it might take, it is rich.

Just read the softening butter trick – fantastic. I always try the microwave and we all know how that goes.

Katie (Mama May I)

I’m looking forward to these recipe posts – as someone who was taught to bake by my grandma, and I also have her recipe box and apron collection. I swear I could hold those old cards, sugared and floured and worn over the many, many years that she used them. I smell her on those cards, feel her on the aprons, still. So few things make me as happy.

Great story! I’m curious, tho..how did you handle the broken rolling pin? It looks as if it could be a rolling pin that was handed down. I think I would’ve nearly lost my temper had that been the case. I know, in the big scheme of things, it’s only a rolling pin, but…just wondering…

Your grandma’s applesauce cake looks delish. I’ll be giving her recipe a whirl this weekend! 🙂

What a great post….I love how you have “eggs on the hoof” or rather on the claw in your backyard!

Fond, fond memories of this recipe…I used to make mini loafs of this at Christmas to give to friends. I think I will again this year.

Grammy would be proud…I know I am!

I love the kid commentary, it is so familiar! Cooking with kids is probably the most anxiety producing activity you can do, at least in my opinion, but you seemed to have pulled through it gracefully, with only one tragedy (rolling pin). Congrats mama! xoxo

Monkey off our backs – hah! Funny!! Talking hen! Love it! But do please tell Alice not to worry about rolling pins and eggs; a dog needn’t concern herself with such things! (Nor should she mutter, for heaven’s sake! That is for old ladies, cats and the very young. ;D )

Ps – hope you post all 64 recipes (over time of course) so we can all cook along! I’m totally making this cake this weekend.

Minnesotagal: I plan to! It is really fun. And, maybe people can share their photos/experiences on my facebook page or something? I love it!

Caroline: It was Margot who muttered! Ha. Alice does mutter occasionally though.

Lisa: I did love that rolling pin! These things happen when cooking with kids. Not to say I never get frustrated but that incident didn’t tip my temper.

I know I don’t have a gift for writing or for words, but I am sincere when I say, “this post is so cute and funny!” Love how you narrate the entire scene for us 🙂

Do you have a family recipe for peach cobbler in your collection? If you don’t, I’d love to share my Great Grandma’s! To.die.for. She even melted the butter in the oven…no micro-waves allowed…no micro-waves invented, actually 🙂

I loved the progression of the post, starting with Sinatra, progressing through tears, breaking pins, laying eggs, and Alice muttering. I felt like I was reading a short story, bound in a old book, entertained at every turn. I would compare it to a “driveway moment” on NPR. 🙂

So sorry to see the pin break. My soft-spoken mom broke many of her grandmother’s wooden spoons while cooking/getting my brother and I to stop an argument; and I remember her vivid reaction each time. I commend your zen-like control, and your girls’ ability to move on together.

I love the sharing of recipes – old and new. I let Dad leaf through his mom’s box this weekend, and I nestled next to him and listened to his memories related to those cards.

You know what you need on this? Vermont maple cream.

Good thing Christmas is just around the corner!

I’ve been wanting to dig into my grandma’s recipe box too! Thanks for the nudge. Love the story in photos. 🙂

Baby By The Sea

So sorry your little monkeys broke your rolling pin. Yummy. Love the recipe. Grandma is looking down, in the great bottomless boats of heaven with a smile on her face.
Billy Collins “The Dead”
The dead are always looking down on us, they say,
while we are putting on our shoes or making a sandwich,
they are looking down through the glass bottom boats of heaven
as they row themselves slowly through eternity.

They watch the tops of our heads moving below on earth,
and when we lie down in a field or on a couch,
drugged perhaps by the hum of a long afternoon,
they think we are looking back at them,

which makes them lift their oars and fall silent
and wait, like parents, for us to close our eyes.

Jenn! I love that poem so so much. Thank you for introducing me to it! xo

First time here, and wow, what a happy little discovery!

I am going to try this cake tomorrow, but I’m hoping someone (Nici?) can translate the measurement of the cloves- is it 1/2 teaspoon? I can’t quite read it on your grandmothers card.
Thank you!

I remember making this with grandma!!!
Lets trade our recipes next time we get together and copy them!! I have a recipe box full too! I get teary eyed sometimes when I am reading her writing and her little side notes on some of the recipes!
My favorite…the boiled rasin cake…….! it is the bomb!
Grandma knew how much I always loved it, and when I was a sophomore in college sent me a whole cake….(Arizona to Oregon)…It was amazing….I went to a far corner of the library and ate half of it!
She was so wonderful!
I love you, cous!
xoxoxox

This cake is in my oven now. Made it “with” my almost 6-month-old. 🙂 Nothing like the smell of spicy sweetness baking and the sounds of baby giggles!!