I love fall so much. Everything tucks in. Decayed plant matter into soil, birds into down, people into homes. We have a reserve of summer’s solar energy to last us through the chill, damp, fireside months. We don’t draw too much at a time because we’re wrapped up, hunkered down, gathered, snuggled and tucked in.

I’ve been feeling especially inspired and creative lately. I think much of it has to do with getting groovy in my home. I hadn’t really settled in, arranged bits, perfected corners. We moved in, did a ton of work texturing and painting walls, ripping out bathrooms, tearing up carpet and redoing electrical. Oh and building a fence, a chicken coop, a staircase off the deck, a painting studio for Andy, stone stairs up the back. In the midst of and around home reno extravaganza, summer beckoned us outside so the finessing and curating of our stuff never happened. We literally tossed and piled our belongings and went outside.

My not loving our interior composition is the reason I haven’t continued my home tour. Thanks so much for your curiosity and interest in our new space! I really do love your requests to see more. Our home is becoming more ours and I can promise with certainty (!) that I will do a series of posts over the next few months.

But today? Today, it’s nuggets. Of the electric fall variety.

:: Margot and Ruby have been playing sharks. Only they know the rules and when prompted to share, it is near impossible to understand. This leads to more questions and eventual frustration for Margot who feels like it is the most obviously easy thing to play on the planet. It usually involves bathing suits and lip gloss. Although it can also be played in puffy coats at the corn maze by the hay bales.

:: Ruby has started school one day a week. Mondays. I have so much I want to write about it and can’t quite get it out just yet. Soon, I think.

:: We used to do a family walk every Sunday but haven’t for a while. Last weekend we ventured out and remember why we love the slow jaunt so much.

:: The girls and I biked to our neighborhood farm party which is this quintessential fall celebration. There’s fiddle playing, face painting, hayrides and pumpkin carving.

my awesome hat made by my friend, Piper & Paisley

And while on the hayride I took a self-portrait with the girls. A woman across from me took a photo of me taking a photo and, as these things go in Missoula, we have 72 mutual friends so she was able to email it to me! Which I love.

:: We didn’t end up getting our pumpkins at the farm party because by the time we turned our attention to the patch, they were pretty picked over. Instead, we ventured to our beloved Benson’s where, out of hundreds of pumpkins in every shade, shape and size, Margot surprised me by selecting a lone, small, stemless dude. 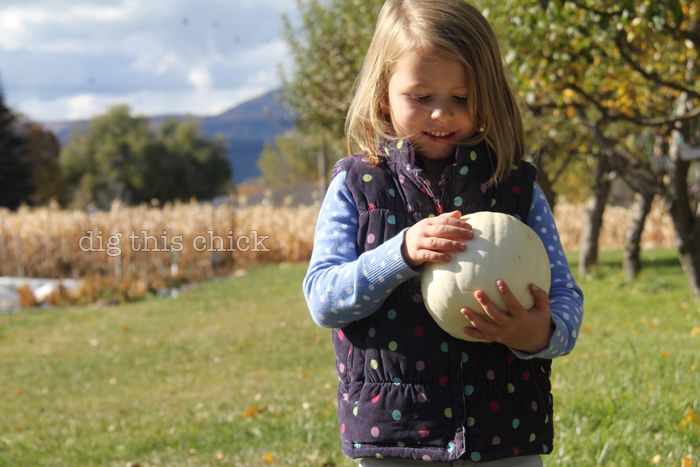 And Ruby carefully selected her ‘little baby orange one’ that she carried around with a matching carrot between her teeth.

As we waiting in line at the farm counter, two women hauled in hundreds of dirt clad, neon orange carrots and began washing (including a two pound carrot that you may have seen on my instagram feed). We waited, chatting with sunny people over piles of beets, tomatillos, cabbage winter squash. And then the three of us sat on the sun-splashed grass and devoured their sweetness. I like these two so much.

There was a lot of talk about how those pumpkins would carve up. Ruby abandoned all of her plans and enthusiastically instructed Andy to carve a circle and more circles because she wanted a pretend house for birds. She is very proud of her pumpkin.

Margot elected to carve one ‘teeny, tiny, really small rectangle and that’s all’ but the candle wouldn’t stay lit. So we had a little oxygen-fire science lesson and carved a few more rectangles to make her pumpkin fairy hut.

:: I swear Sam has quiet moments where he sits and misses his feline sister.

We’ve had a skiff of snow on the ground for more than a day now. I know it will melt, I know we’ll have a few more warmish snaps this month. At least I hope so because I have to get my garlic tucked in. Everything’s neon and pliable until it’s not so, perhaps today is the day. Also on the agenda: tucking into the sewing studio to make a few costumes: one ‘red baby turtle’ and one ‘unripe beet fairy’.

happy hump day out there

The colors of fall are just.so.vibrant. Beautiful! (Like you and your kids)

Yay! I love nuggets. Especially the rich, autumn variety. Gorgeous. Happy hump day. (Side note: first time ever that I’ve put garlic in the ground with plenty of time before freezing. A new personal record. Hoping we will have our own seed next year with 150 head in the ground!)

and that’s an awesome shot of you getting the self portrait. Fist bump to Erica! 🙂

LOVE the photo peek….now back to read!

What a lovely, lucky life you have. Thank you, as always, for allowing us to share it.

Oh, your fall photos are always so beautiful. They are drenched with everything good about your family, your home, your state. xoxo

Oh, yum. Autumn is so freakin’ delicious and your images and words do it justice!

Oh My… Sam missing his sister got me. We lost our girl kitty in August (to cancer.) And I know there are times our boy kitty is looking for her 🙁 Sad…

I’ve always loved your nuggets. Thanks for sharing.
Nici- I also sent an email a week ago but haven’t had a response. Just want to make sure you got it.
Happy hump day to you too!

When I read posts filled with beautiful pictures like this one, it makes me miss Missoula soooo much it hurts. Our house there is the bright orange one just across the street from Benson Farms. Work took our family out of state, but at least once a month I consider throwing in the towel and moving back to Missoula even if I have to work at Mcdonals.

Nici, I feel like an old aunt gazing at your girls, thinking: my they’ve grown.
Thanks for the glimpse at your sweet days.

,,,beautiful photos! i can’t wait to see the sweet goblins in their costumes,,,

Ruby has completely lost her baby look and sometimes I have to look hard at your pics to determine which girl I’m looking at!

these pictures were absolutely breath taking! I loved the one of Ruby with her face painted, that look, so intense! And also the one of Ruby with her pumpkin full of holes, i really like that look for a pumpkin, don’t think it’s ever been done before. Been stuck at home with a cold, and it’s made me sad, because it’s full on fall outside, finally! and today was especially beautiful! windy, crisp, clear blue skies and lots of sun. colorful leaves dancing in the wind making rhythmic circle as they went along. ::sigh:: hopefully tomorrow will be just as wonderful and i’ll feel good enough to venture out with my Dom.

Oh my. There is so much FALL GOODNESS in this post.
I’ve said it before, and I’ll probably say it again – but I love how distinct your seasons are. Here in Australia, our seasons mesh so blandly. Apart from the slight change in temperature, there’s no huge seasonal changes here. I love how the seasons are so different and so embraced in the USA.
My brother & his family live in Kansas. I live the seasons through them and their photos & updates :)))

And Margot and Ruby have both grown so much this past season. I have to examine each photo carefully to work out which daughter it is 🙂 They’re so alike. Yet so different 🙂 Both gorgeous!!

Our fall seems to have vanished but the last two days have been snowy and not windy which is so rare and beautiful. I have to say I’m SO excited for winter and our little ski hill(Teton Pass) is going to be open this year which makes me want to jump for joy! If you guys ever want to take a vacation to the other side of the mountains let me know and we’ll introduce you to our hill.

Both the girls are so big. Ruby has moved to little girl and Margot the wise sage. I hope Ruby’s loving school and you, a few moments of solitude.

Oh my, these photos are indeed electric. Best pictures you’ve posted in a while, and I love all your pictures generally. Happy fall!

Your blog warms my heart. And your girls are such beauties.

Have a great weekend!

Appreciating the persistence you put into your site and in depth info you provide. It

You can find a couple of intriguing points at some point in this posting but I do not determine if them all center to heart. There is definitely some validity but I will take hold opinion until I take a appear at it further. Good write-up , thanks and that we want a lot a lot more! Combined with FeedBurner in addition