On father’s day and summer solstice eve, while Andy was out whooping it up at our pal’s bachelor party, I made soup with bug and Alice. And so I call it ahsoup because Margot has this charming habit of adding ah in front of single syllable words.

It wasn’t just any soup but soup made from an item one would certainly otherwise toss to the chickens or compost. Radish greens. It pains me to toss the greens of radish and rhubarb in partic because it is so meaty and just must be full of good-for-you stuff. So I inquired with my pal, google, and found this recipe. What did a girl do with this kind of question before google? I think she most likely tried it with great hope. She was wishing with all her being that it’d turn out because she was with back pain and nine children and used the last of the household’s wood to light the fire that boiled the soup that turned out like poo and they had to eat it for days anyway, cold, because the papa wouldn’t be home from elk hunting with for another two weeks. That’s what it was like before google.

my girls are always underfoot in the kitchen

But I have the privilege of typing eat radish greens? on a tiny, white piece of metal and plastic and in .37 seconds a recipe with 22 reviews telling me it is great is right there in front of my eyeballs with the option to print. neat.

So the soup turned out fabulously just like all those reviewers said it would. And I got to use the two Greatest Culinary Inventions Of All Time. The immersion blender I have talked about often but the supa slick herb scissors are a new gift from Laura. *magic*

as if scissors weren’t cool enough

I made some changes and below is the recipe with my edits.

Melt the butter in a pot over medium. Throw in the onion and cook until soft. Add potatoes, radish greens, broth and herbs. Bring to a boil and then reduce to a simmer. Cook until potatoes soften. Remove bay leaves. Use the Greatest Culinary Invention Ever to puree. Add cream slowly while stirring until desired creaminess is reached.

The original recipe calls for thinly sliced radishes on top and I found the flavor and consistency and aesthetic to be all wrong so don’t do that. Even with a pretty linen and artful crop it still hearkens a turd in a punch bowl.

so hideous. I buried the radishes but they kept turning up on the spoon.

Only include the radishes if you have a toddler who would enjoy eating the soupy slivers. Bug gobbled up all my radish garnish. Margot LOVED this soup.

So, many of the recipe reviewers said things like “To reduce the fat I didn’t add the cream and instead added a dollop of low fat sour cream…” eh? I am realizing that the world doesn’t eat like Montanans do. We eat real butter, extra virgin olive oil, half and half and peanut butter. I know there’s a market for all those substitutes but I don’t believe they are so much consumed in Montana. Perhaps it’s that we aren’t often in bikinis.

I added extra cream. And then I made cocoa oatmeal cookies. Now that could sound excessive but 1. I am pregnant and very hungry and 2. In the afternoon I became obsessed with a cocoa powder cookie with oats and 3. I was active today with pilates, a bike ride, gardening and a walk…Again, google assisted and voila. Effing awesome cookies. I omitted the raisins included in the original recipe because my man thinks raisins offend the perfect fruit, Grape. And tomorrow’s his day. Speaking of fattening food and tomorrow being his day, I bought him an entire half of a cheesecake for father’s day because he had a piece of this cheesecake last week on a work lunch break and barely stepped across the threshold of our home that evening before breathlessly recounting every detail of the life-altering experience he had at Tagliare’s. Followed by his exclaiming and, babe, they sell whole cakes! and wondering if it would be nuts if he, every once in a while, ordered one just to have at our house.

out of context shot of Ida and my belly

the dough is quite tasty 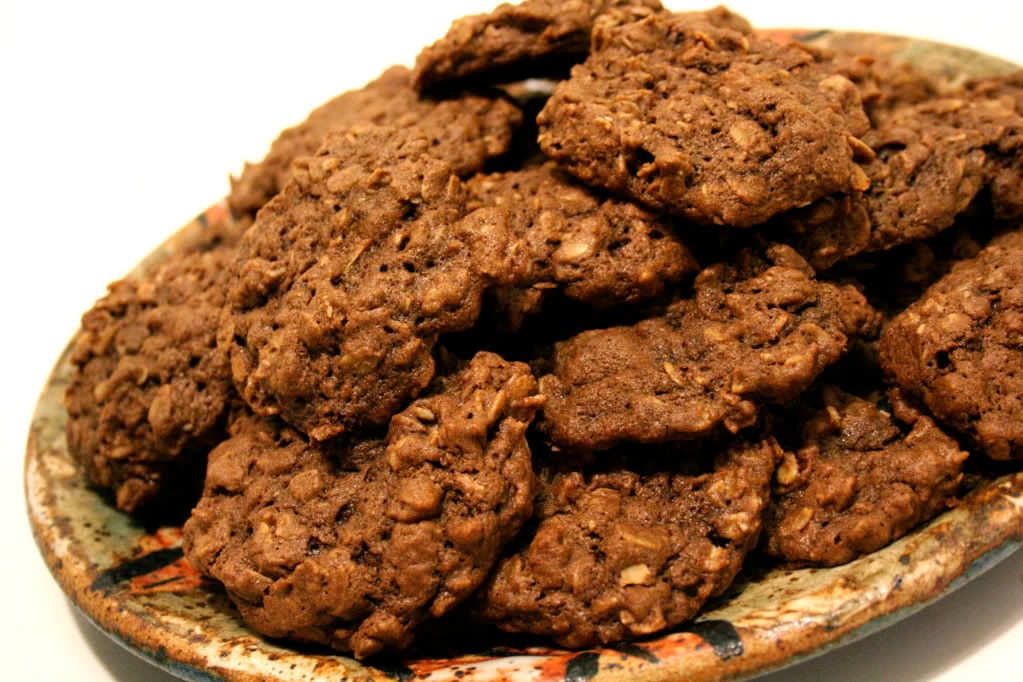 kindof hard to photograph without looking like dog food. trust me, they’re tasty

Happy papa’s day to all you dads out there, with a special shout out to my amazing and inspiring dad. Hope you have a loving and fulfilling day. I am loving your posting these days. Damn you are active, too! It’s inspiring. And I really despise all things low-fat and sugar-free. Can’t wait to make the cookies.

Love the belly shot, too. Didn’t seem outta context at all to me.

Happy Father’s Day! Hope you have a good one. xo

Hi Nici,
I never tire of reading your posts…just love the way you get your thoughts into words… and yes, I think that’s exactly how things were pre-google…it was a hard life:).
The pictures of Margot leaning on Alice are great!!! Happy Father’s Day.
-Barbara

I don’t have any radishes in the garden at the moment, but will have to plant some in the fall just to try this soup!!! However, I though rhubarb greens were either toxic or poisonous. Hmmm! I hate foods with reduced fat content…the cheese gets runny when you cook it, for instance. By mistake, I grabbed fat-free half and half (such an oxymoron!) and thought I would gag when I drank it. Down the drain it went! Real butter, absolutely, but unsalted! Janet

I am with you Burb, I think all the new substitutes will come back to bite us later….some already have.

FATHER’S DAY, here’s to all the great Dads out there…yes Nici your “Dally/Bakka” is one of them! AND we will add Andy to the honor as well.

PS….Margot what are we going to do when you out grow said ahcoat?

i don’t live in montana, but also include real butter, extra-virgin olive oil, half and half, and peanut butter in my daily life.

when you mentioned being pregnant, and cheese cake, it reminded me that when i was pregnant, i made a large, new york style cheese cake (with about 6 blocks of cream cheese) for my partner’s birthday, and after he and our guests ate a couple of tiny slivers after dinner, i managed to devour the entire thing over the course of the following week. i kept telling myself that there was protein, and calcium in there, and my body must have needed it! but i seriously, single handedly ate about 11/12ths of that thing!

oh, and lucky you, that your daughter likes things like radishes and soup.
the “ah” is ah-dorable.

hello – i don’t seem to be getting emails alerting me of a new blog anymore. they mysteriously stopped the last week or so. also, it won’t let me re-subscribe. any suggestions?

blank:
The only thing I can think of is that perhaps the posts are going to your junk mail for some reason? If that isn’t the case, I suggest trying to email feedburner with your problem. Good luck and thanks for reading!

ahhh…..always wondered if you could eat radish greens! Thanks for the recipe. I am going to try it this week.

1. Indeed, I can’t fathom how we survived before Google and the Interwebs.

2. That picture of Alice and Bug … is that dog not the best dog ever?

4. I LOVE my immersion blender. I got it before jaw surgery and it still rocks.

Island gardener is right, rhubarb leaves have oxalic acid, which is good for some stuff, but definitely not eating. I hate throwing them out too, so I just chop them up a bit and toss into the compost tumbler.

Real foods for the win. Reading any ‘diet’ recipes makes me wonder if the ‘lite’ ‘fat-free’ and ‘low-fat’ processes are actually what makes us unhealthy. Less (or more) of the real thing has to be better than emulsifiers, corn syrup and other un-pronounceables.

As afraid as I am of The Fatness, I despise good food made “healthy” with the removal of the good parts. I’m all for butter, extra virgins, salt, real cream and, duh – bacon.

Although I don’t think you can really diet-up bacon.

I will probably try out that radish green soup of yours since we get a ton of radishes in the farmshare and I typically compost the pretty greens because I haven’t the energy at that point to find yet another way to eat greens. But if you say it’s good…

I also have a bizarre desire to hold a chicken on my hip now. Lookin’ good!

It is awful to show photos like this. It is 5:30 p.m. and I am hungry. Just thought I would pop on over to your blog to see what’s happening and look what I find! Chocolate cookies! Printing the recipe and saving for tonight. 🙂

I am finally emerging from my bed caccoon of three days and getting some work done. Funny. I am craving radishes like crazy. Ate an entire cluster from the produce stand all by myself the other day and today returned to buy two more…one of which is gone. The soup sounds divine. And I never ever skimp on fat. Margarine and reduced fat anything is nothing but sacrilege. Anything from your garden always makes me smile…it all looks very food magazine-ish. And as for Margot Bea…bigger smile. She’s a hoot, she is. Love the new pics in the header and as always love the coat. xoxo Miss you tons.

p.s. my belly says hi to your belly. xoxo

oh, everything looks so good. i love seeing the pictures of the chickens too!

i purchased Neverwinter astral diamonds for my friend, superior!