Paige, our buff orphington hen who unbelievably, inexplicably escaped death a few months ago, has continued to crow, caw, clamor and creeeee from morning to night. She’s always been one of my favorites, named by and after my best friend.

^ last November, one week before Ruby was born ^
Paige witnessed some gnarly shit and, honestly, I don’t blame sister for reevaluating her gender and purpose. After her hen honeys were slain, she stopped laying eggs and starting sleeping in the coop next to Olive, my gray tabby. And then, when some new chicks joined her click, she started announcing to that murderous raccoon that COCKADOODLEDOO YOU CAN’T HAVE ME YOU MEAN TWIT!

^ Paige with her old flock: Ida, Bossy P, Clementine and Lindsay ^
Thing is we are in city limits and roosters are a big fat no no. It was giving me so much anxiety. Every time she sang I cringed, imagining all of my neighbors cursing me and my god forsaken hen. I had taken to desperate acts like racing toward the coop, arms overhead sternly, quietly scolding her, Paige. No. More. Crowing. And, sassy chicken just stared at me and ARRRARARRRRROOOREEOORROO! right to my face. Over breakfast in the morning, we’d hear her rev up and Margot would say what she had heard me say so many times, Paige, pllllleeeeeeaaaaase stop crowing.
And so what to do with her? There are three options: 1. Find a new home for her. But, seriously, who wants a transgendered chicken? 2. Move to a new home outside of city limits. 3. You know. And I really really had a hard time with that because she is my pet not like my dog and cats are my pets but still. And even if I sucked it up and axed Paige and was all urban homestead badass, I couldn’t eat her. And moving seemed a bit extreme. So, I asked facebook to help me out. And, sure enough a friend suggested a friend and lo, he was into it.

So after a cup of coffee this morning, I set Ruby in the jog stroller, got a cooler out of our garage and entertained the puhjesus out of Margot and the neighbors. I totally see now why Paige escaped the sniper coon. Homegirl is quick and intimidating when she wants to be.
She must have known I wasn’t just coming in for cuddles. And I really wanted it to be as untraumatic as possible. But it eventually turned into a game of tag and all the other hens were on her team, tripping me up every time I went to pick her up. It was totally nuts, y’all.

I had her three times before I finally captured her snug in the Coleman. 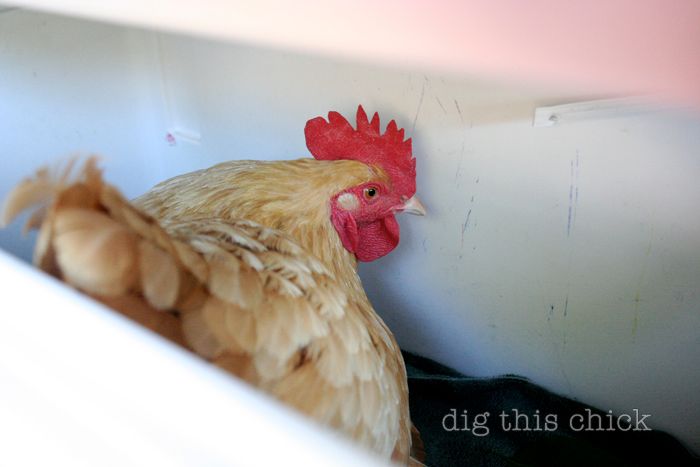 Check out how much bigger her comb is in this pic compared to above! Rooster.
She had a little towel bed in there and it was dark which I thought would be comforting. I propped it open, wiped the sweat from my brow and loaded Ruby, Margot, Paige and me in the car. I didn’t turn the radio on, hands at 10 and 2, the sun was just screaming up over Mount Sentinel. Margot asked, mama, where’s Paige? I would reply, right behind you, bug. And then she’d think for a minute and say, mama, where’s Paige? over and over. I told her a felt a bit sad and she said, yeah.

^ new digs and new hen pals ^
But her new home is stellar. She has a roomy coop, six lots to roam and a view of Mount Jumbo. Shane will take eggscelent care of her (couldn’t resist). Margot felt good about it so I decided I would to. So now our original flock has moved on and we turn to Peanut, Maude, 16 Months and Violet to tell the next chapters of our chicken story. 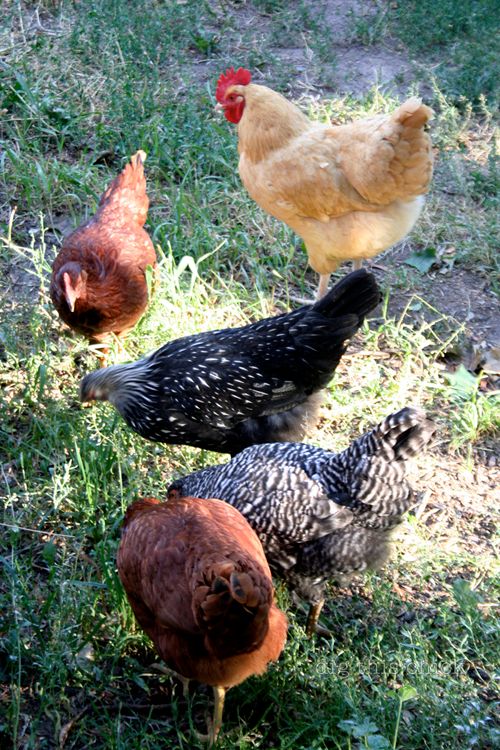 ^ Paige on her farewell romp this morning ^
Share
dig has chickens

A very entertaining post to read. Who would think I would like to read a story about chickens? They get under your skin; don’t they.

So do you have separation anxiety yet? This is a piss of a post. Thanks for sharing the crazy chick moment.

Nici, I mentioned your transgendered chicken yesterday when I picked up my weekly dozen from Heather’s Heritage Hens. Heather said she’s heard of hens assuming a male persona when there are no roosters around. Apparently they feel there needs to be at least one manly, protective chicken in the flock. Makes sense, especially in Paige’s situation, huh?

I’m glad Paige has found a good home and that you & Bug feel ok about it. The tears currently streaming down my face however are from the fact that I had momentarily disremembered that Bug had named one of the new chicks 16 months and the fact that it was just rolled into the list of the other chicks names as if everyone has a pet named after an arbitrary length of time. Hilarious.

You are welcome. I’ll look forward to seeing Paige the Transgendered Hen every Tuesday, Wednesday, and Thursday afternoon.

Katie (Mama May I)

That was a really entertaining story! Something tells me she’ll do just fine.
🙂

I don’t know why, but i just love this post. Though I am sorry for your troubles rounding up your Paige!

Sounds like alls well that ends well, mostly. I also love the resiliency of toddlers . . .Margot’s swift acceptance of it all.

Phew, I am glad my chicken namesake has gone off to a good place. My favorite part of the story is Margot asking where Paige is… cause I like to pretend she is asking where I am. I am glad you are crowing free now. Maybe there can be a Paige Two someday down the line. Or Paige 16 months. Love.

wow! look how masculine Paige got! Check her comb and wattles in the pic when you’re preggers to her now. Major testosterone flowing there. I have two Buff Orpingtons that are 18 months as well and their combs and wattles don’t look anything like that. Very impressive! It is apparently more common than we would think for hens to step into some rooster boots when the situation demands it. I think it’s pretty cool

I am so sorry that you had to give her away though. I am facing the same thing, only with all my chickens, when I start on my journey that we discussed because I’m not going to leave my husband to take care of them all that time. It’s going to be really hard for me, so I feel your pain completely.

But, hey, her new home looks AWESOME!! That’s a beautiful rooster she has to take care of her and maybe that will make her stop crowing. Will be interesting to see. She is going to be a super happy girl there. I can tell from the pictures. You are so lucky to have found such a great place for her.

Patia, I read about the same thing! It’s so cool.

Lisa, I KNOW. She really assumed roostery attributes all around.

SO, she hasn’t crowed once in her new digs! Amazing. And, just like the real Paige, she gets along fabulously with every chicken. yay.

Hey! I am your newest follower! I love everything about your blog and check it approx. 10 times a day to see if you have anything new! haha – not a stalker at all…

Omigosh the predicaments those birds get into. Mine were nothing like anyone’s I ever talked to. For starters they flew. High. Like to the roof of the barn as if they were practicing to be weathervanes. Crazy birds. I fed them pasta. I miss them. : )

oh my gosh I LOVE that first picture!

That first photograph is, hands down, the best pregnancy photo I have ever seen. Classic. Just another mother hen. Thank goddess we don’t have to actually sit on our eggs. Though it does feel like it sometimes.

Kim: Nuts. Any animal can do anything she puts her mind to!

Daniele: Me too. It’s hanging in my living room.

Betsy: Ha! I am SO thankful I don’t have to sit on eggs!

Oh Facebook, you ARE good for more than posting embarrassing photos of people at weddings and bullshit time wasting games.

I’m so glad Paige found a good new home and that your new flock is settled.

And I LOVE that one is named 16 months. That’s just funny stuff.