Our weekend was random, weird and hilarious. Beginning with the washing machine dying a slow, audible death with witnesses.

And it is totally a goner. We bought a new one and it is a high efficiency number that is quiet and fast (also, my homemade laundry powder works wonderfully for all those who inquired about its use with HE machines). One would have thought Andy came home with a new bunny atop a chocolate cake what with the excitement surrounding this purchase. The girls picked raspberries with our neighbor as Andy, a friend and I hauled the old one up and the new one down. There was a moment on our narrow staircase, when my husband stood four stairs above me, heaved the dolly up a step and I shoved with my right shoulder. Our eyes met over the smooth white plane of dead washing machine and we laughed. I remembered building those stairs, hauling so much stuff up and down that space over the last eight years.

Margot used her camera to document the new appliance bliss

“I had no idea a new washing machine is so so awesome!” Margot shrieked as we all participated in leveling and the first load. Ruby said “doing?” with her dimpled elbows together and her wrists up in question.

“That’s when I took a picture of Ruby. She didn’t want me to.”

So that was Friday. Pretty much the whole day actually. Saturday morning I made my way to the kitchen for coffee and the grinder was all ferkockteh.

Sunday morning was an early rise with one very energetic Ruby Jane. The routine was familiar: undesirable and painful with a quick shift to funny and awesome. Read about our good morning in mama digs: good morning. Then Andy was in a golf tournament which is hilariously random to me because he has golfed like 12 times in his whole life and he won a drive contest and came home with a butane torch and a $50 gift certificate to Boyce Lumber. 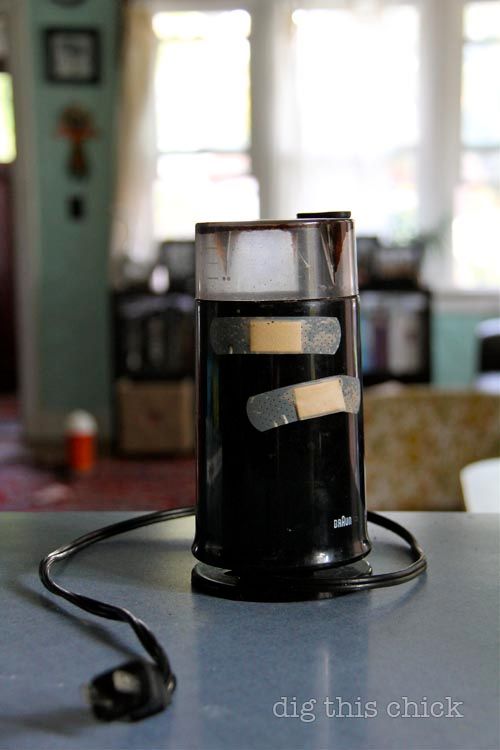 Sunday afternoon I discovered the coffee grinder had again been tampered with.

And this has nothing to do with anything in this post but it had been a while since we downloaded photos from Margot’s camera. Makes me want to run outside naked right now.

just one of the photos above taken with a Canon Digital SLR from Vanns.com
Share
mama digs

I am glad my children have never decided to store anything in the coffee grinder, although I will admit I have lost a couple VCRs to sandwiches. 🙂

Love it! That last picture Margot took is awesome and I love Ruby’s blue eyes in that close up!

Congrats on the new machine. I’m not sure what I’d do if we had a new one…jump up and down, sing from a faraway mountaintop…I don’t know but it would be good.

I feel like I took a bit of my afternoon coffee buzz out on you. Sorry about that. I should probably delete half of that comment but I think I’m just gonna go with it…

Happy Monday to ya!

I seriously just laughed OUT LOUD, at work, regarding the coffee grinder. Got a couple looks, won’t lie!

I can picture your whole scenario with the washing machine! We just installed a set in July, but first had to get stuck on the stairs with the old washer…..so stuck that we sent our oldest son running door to door in our neighborhood for help. Finally, 15 minutes later, he came back with a helper from the 6th door he knocked on! But sooo worth it….our whole family still celebrates doing laundry 🙂

And I laughed a deep, jolly trucker kind of laugh with the hair & coffee grinder story….hahahaha…..laughing again!

Speaking of appliance reliance – over the course of a couple weeks this summer we lost our weed-wacker, lawn mower, dishwasher, microwave and our oldest subaru blew a head gasket. Our dishwasher is still hovering in the “sort of” works zone. Funny how much we rely on these things to get stuff done, eh?

Nothing like having young’uns and a washing machine that works to inspire gratitude! Congrats!

I am seriously going to be terminated from my job (or at the very least, annoy several of my peers) if you write such hilarious posts!

You are one talented and amazing writer and photographer.

I am not certain that I said the reason for said job termination is because this post had me laughing in a real obnoxious, gut-hurting, rolling-it-out-in-the-workplace-kind of way.

Loved this post! I think the yiddish term you were going for is spelled as follows:
Farkakte

Have a great evening!

Seriously. I would be BEYOND excited at the prospect of a new washer! I would be like a kid on Christmas morning!

Congrats on the new appliance addition!

Just wondering what W & D you got?!?!? We are in the market for a new one & I’m looking for recommendations!

Hey Nici, I think you should run around naked. I’ll do a naked jaunt through the community garden I live in. (yes, in!) (Oh, come on, it’s late! there are no kids around!) Because yeah, snow, baby, it’s in the air! At least, it is over there, I think? Anyway here it’s rain. It’s raining. But I ain’t complaining (oramI) because we had a whole week of summer and BOY I should not have had that coke before bed. Sorry ’bout yer things!!

We LOVE our HE Washer & Dryer. I totally get the excitement your house is enjoying from the new purchase.

That snow picture….ugh. So not ready for it. We’ve had Beautiful sunny warm (a lot warmer than usual for Sept) weather in MN for the past couple of weeks and I have been soaking up every moment of it that I can….in anticipation of things looking like that last picture sooner than I am ready for! Runny naked outside wasn’t my first thought, but once I read it…sounds like a great way to soak the warmth in 😛

We were thrilled to get our front loaders and all sat around watching the first few loads. I now have mixed feelings about them. There is a weird smell that is a consistent problem with them. What I do know is that you must be VERY careful with detergents. The Seventh Generation detergent, for instance, causes problems with “gumming up.” They just released a new HE version, but our trusted maintenance tech told us that you only use 1 TB of any detergent and to stay away from anything that has not been HE certified, as they cause long term damage.

Love your posts and read each one. Just thought I’d share some practical feedback for a change, but still a big fan. : )

Hi,
Just wondering if you had found your car keys yet?

My 2 year old says “doing” too – it’s the cutest! Thanks for the smiles!

tales, Thanks for this info. I think this recipe is ‘certified.’ From what I understand you just want something mild and low sudsing which this is. I got the recipe from a book and it declared it to be safe…I’ll let you know if anything wonky happens!

debbie, no! I can’t believe it. We now have the other set but the original is still MIA…

kparks, we bought a Samsung washer and we already had an LG dryer. So, it isn’t a matching set. Both purchased from Vanns! Of course! 😉

We have HE front loaders, too and we also have occasional stinkage… like when I *gasp* leave my clothes in the washer over night… but the stink tends to be a bit stinkier than the traditional washers. Oh! and I use just a scant tablespoon of detergent with our diapers, if that is at all useful.

Love finding random fixes (like the bandaids on the grinder) around our home… my two dudes (4 and 23 months) go through a LOT of tape.

We love our front load washer, but I am very careful about the amount and type of detergent. Also, if you don’t want the machine and the gasket to stink (which can eventually affect your clothing), leave the door ajar at night so that the machine can dry out. We’ve had our machine for 18 months and no issues yet with any stink.

Now go back to enjoying your machine and here’s wishing you a great week. Happy Hump Day!

You’re right – new washers ARE delightful! When we got ours, I loved it so much, I made a fricken video.

We even sing along with the “I’m finished” song it makes.

So, what I’m saying is that I *get* your newfound adoration.

Though hair in the coffee grinder made me gag a little. Thankfully, the band aids had me honking – too funny, those girls.

We had stinkiness in our front loader, too. I first ran a bleach load and since then we always keep it open if it’s not actually running. This was fine when we lived in a house with a basement. Now we use a little duck that’s supposed to keep your kid from whacking their head on the bathtub faucet. Wasn’t really something we though about but the ducky has been holding the washer door open for over a year. Good conversation piece, I guess.

Oh my good lord, if you figure out how to get your Rubes to sleep in, HIT ME WITH THE SECRET. 4:53 AM this morning, yesireee. Ooooooph.

Dude when we got out new washer, I once declined going out with my work friends because I was staying home to do laundry. They never let me live it down.. “you use to be fun, till you got that washing machine” … What?? I was excited, ok?!?!