I remember, when I was first seriously in love with Andy — like introducing him as my boyfriend to anyone who looked our way, reading something that declared seven years in a relationship equals one of two things: true love or divorce. Eight years later we married and we’ve now been married for seven years. Happy to report it’s true love over here.

I know it’s unusual that I met my guy when we were 12. That I’ve had a crush on him since then. That he was starry-eyed over the class photos of me that adorned on my aunt and uncle’s fridge, even the one where I chose to wear a canary yellow ribbed shirt under overalls that were two sizes too big.

It’s funny to me now that I questioned (and even felt frustrated with) our love-at-first-sight energy. But I did. Because, when I was 19, I wanted to travel the world! Fall deep in love and have my heart broken! Date around like a regular ol’ single gal! It quickly became clear that none of that was my fate. I am so happy I grew up with this man and then grew alongside him to where we are now. From holding hands in the Roman Theater in high school to holding hands while I pushed our kids out of my body. He’s the greatest person on the planet, I think.

Happy Anniversary, love of my life. 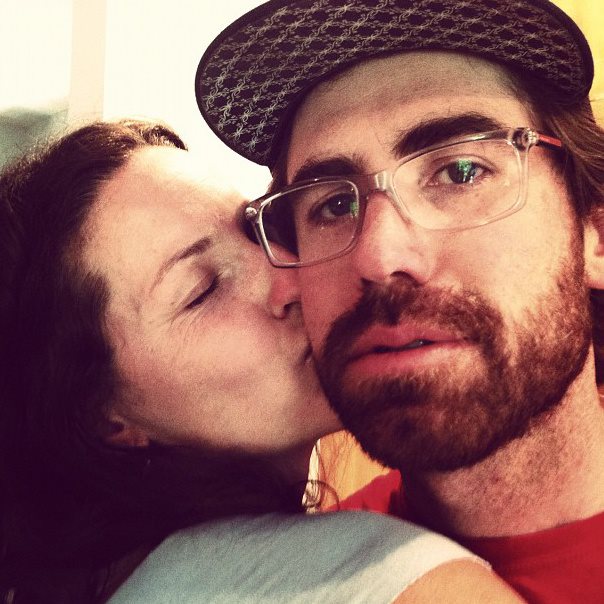 Hard to find recent photos of us! This gem by our bff Caroline.

In this week’s mama digs, I wrote about the stash of rainbow, ahem, balloons Ruby found in my bedroom. Are all of your friends talking about vasectomies? Click to read my weekly column mama digs: colorful balloons.

Congrats on the seven year milestone. Hugs to you both!

Happy anniversary! I also met my sweetie when I was young- 13. He did not return my affections, so we did the whole “best friends” thing for about 10 years before he changed his mind. We were together for 5 years before we married, and have now been married for 9… and I am proud that he has been my best friend for almost 25 years. It did not come without its rocky times, but its true love over here, too.

Congratulations on such a happy milestone. I love our wedding anniversaries. I too, fell in love in high school, my 15 to his 16 and we have been married for 30 years. One of the first in our circle of friends to marry and one of the few still married. I feel blessed to be with my husband. He is my best friend and I adore him. We have kids and they are almost grown, but we have always been most important to each other. Especially now that our chicks are starting to leave the nest. We are a good ying to each others yang and feel very blessed.

Happy anniversary to you and Andy. May you have many many more happy years together!

Happy LoveNest and LoveFest to you. What a beautiful thing a happy marriage is. Wishing you many more happy years. xo

I love this story and the balloons comment made me laugh out loud. So happy for you two! (And you four.)

Happy Anniversary you two love birds! I love the way your talk about him Nici.
We too celebrated our 7th wedding anniversary this month 🙂
Cheers to LOVE 🙂
xx
http://blog.scissorspaperrockdesigns.com.au/

Funny, isn’t it, how things don’t always go as you expected them to? Sometimes, usually, they turn out BETTER 🙂 I too, thought I’d be single until 35. But nope. Boring suburbia here I come!

My husband and I have been together 7 years Sept 14th. Married just 3. Our wedding date was picked based on a Willie Nelson concert, so how could it not last?

I met Ben when I was 12 and he 19 (his sister babysat me). And our lives continually crossed between our siblings. Then at 18, his brother asked me out and blew me off, and the rest is history. I do treasure that I’ve grow up with this man. We were so young. Who knew.

BTW, hysterical article this week. How DO you keep a straight face? Some of our friends have done the Vasectomy route, and we are still talking; but there’s a part of me that knows I saved my maternity jeans just in case. Really, they made my ass look great!

Happy Anniversary to you two, bet it feels like yesterday!
I’m been smiling all morning about Ruby’s balloon find, and carrying Margot’s school to the museum!

happy anniversary! our is around the corner . . . much love to you all! xoxo

Happy Anniversary! Loved your mama digs story, made me laugh right out loud. And yes all of our friends are having the “Big V” discussions, so it’s not just your circle of friends.

Wow! I love your love story and the way you talk about Andy.
Ps. Loved the mama digs post..too funny!

,,,happy anniversary to one of the cutest couples on the face of the earth!,,,

wow what a beautiful love story! i’m sure your girls will cherish that one day.

Happy Belated Anniversary!
It is so special to have grown up together, to understand completely from whence someone has come, all the crazy family dynamics; no explanation required.
I love that I met my husband when I was 14 and we started dating when I was 16 and he 17. The only reason we didn’t start dating right away was because I was ” going with” someone else. We got engaged at 18 and married at 20. We just had our 20th wedding anniversary . It is crazy but I love the fact that we are going to end up on a page in the local newspaper for our 60th anni. That is pretty freakin amazing.
And yet, he still surprises me daily with stories I had never heard before or the immense beauty at how her loves our girls and me.
We are blessed women for sure.
Drink it in!!!

oh, happy love-day you two! i mean really, it is so rare!

Reminds me of Hubby and me! We met in fourth grade, and I’ve had a crush on him since then. We started dating at 16, maried at 24, and hit three years married this month. Happy anniversary!

this is great blog, I will certainly be back.